When I tell people Pancake Hollow Sugarworks makes Black Walnut Syrup people usually ask, “what is black walnut syrup and how does it taste like?”.   Having been made the same way as maple syrup, black walnut has the same level of sweetness and at 68% brix sugar content, it hits your pallet with the same level of sweetness!   The color spectrum of this syrup is much darker on average, the crop is usually dark – like used motor oil, even are being fully filtered. 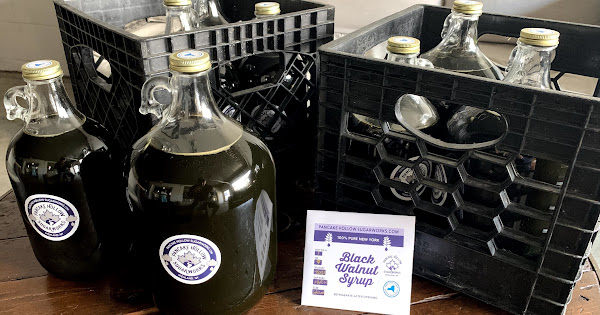 Several trees can be tapped for sap, maple, birch, black walnut and even hickory to name a few, and probably more.  Just because you can tap all these varieties, that doesn’t mean they are all easy syrups to make; going down this list the trees get increasingly finicky, producing less yield in syrup per unit of effort input by the sugar maker.  Pure Black Walnut Syrup is much more rare than maple syrup, more rare than birch syrup.  Hickory syrup may be the only other syrup made purely from tree sap that (I am aware) exists and that can actually be found for purchase. 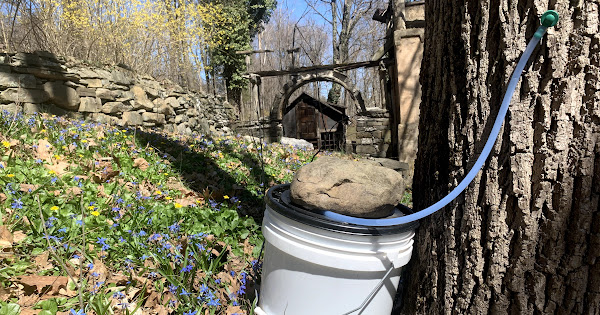 The ability of a sugar maker to successfully make syrup from black walnut trees falls right on that line of finickiness where some producers do actually make it.  But, we producers appear to be few and far between, as this syrup in pure form is not often if ever found in stores.  Since there really is not much supply in the marketplace, black walnut will likely never be the daily driver of syrups, that will always be maple, which is much easier to make and therefore in more common, plentiful supply.  Black walnut syrup’s place is as a niche, giving a creative chef a truly unique flavor ingredient, a special flare in a single dish on his/her menu that his/her clientele will likely have never experienced before, and possibly never will again.  As a producer, its a value added product that brings intrigue to an operation, no threat to maple the mainstay, a delectable add on. 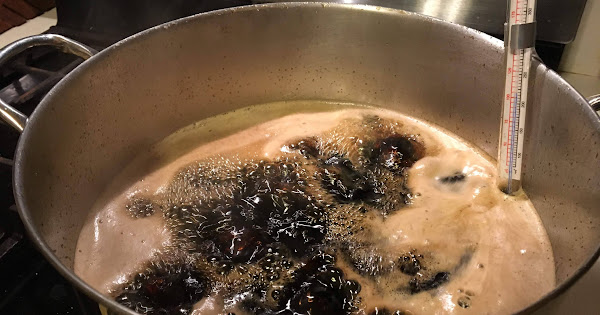 One of the most unique and successful black walnut syrup uses on the marketplace is at Olde York Distillery in Claverack, NY in a brand called Cooper’s Daughter Spirits.  Rory Tice and his wife Sophie barrel age whiskey but not before the barrel insides are generously coated with black walnut syrup, the result one of the most unique and sought after spirits rivalling anything made  in the greater New York City, Hudson Valley regional craft distillery scene.

Here in New York and overall in North America, only a few try and make black walnut syrup, partly because although black walnut trees are a plentiful tree in North America, these forests are further south than where big maple sap harvest infrastructure is located.  From this tree species map, it’s interesting to note that right here in the Hudson Valley New York you can see the area east of the Hudson River into Dutchess County shaded as having these black walnut trees while the west banks of the river into Ulster County shaded as if we do no have these trees.  Pancake Hollow Sugarworks is located on the Hudson River in Ulster County, we are right on the very northern cusp of having these black walnut trees, with the bigger concentrations located in the Appalachia and Midwest, while we are simultaneously located on the southern cusp of where commercial scale maple syrup production, located north of us throughout New England and into Canada. 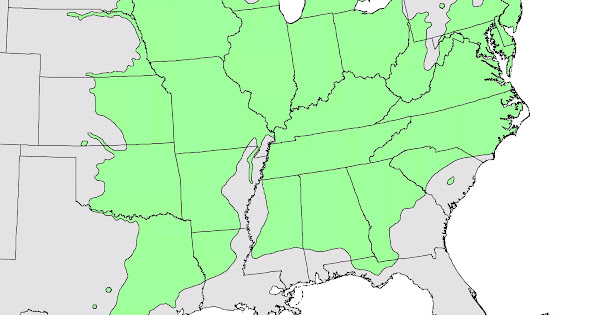 Late winter, early spring, repeated freezing then thawing temperatures are required for black walnut sap to run, just like for maple sap.  Since these trees exist plentifully in more southern locations challenged to find this particular climate, southern producers are usually located in the mountainous locations where elevation allows for colder temps. 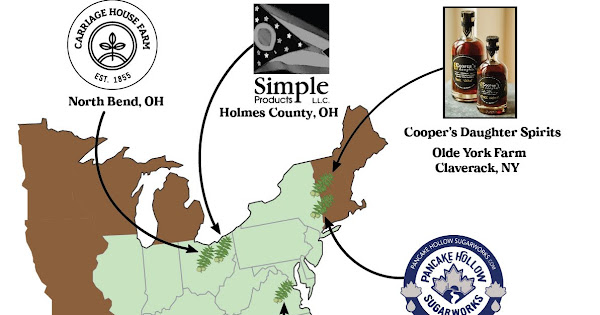 Location and climate are not the only reasons producers find this trees species sap yield to be sparse; trees close to water, natural springs, streams and swamps seem to ‘run the best’ while trees in dry field or forest yield less.  A working theory that older trees produce less sap than younger, smaller diameter trees because older trees contain mostly heartwood, where sapwood around the outer perimeter is where sap flows.

Black Walnut Syrup is truly much more rare than maple syrup.  According this source, Tonoloway Farm with about 1200 taps, is the only commercial producer in the state of Virginia, with other cottage producers scattered around Virginia, Ohio, Wisconsin, Maryland, Kentucky, Missouri, Idaho, New York and more. 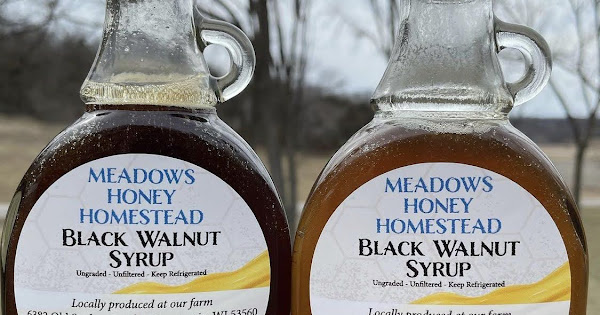 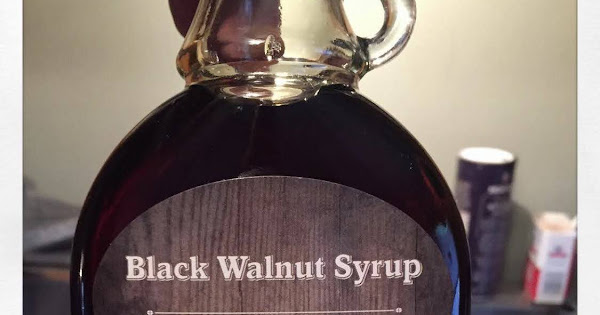 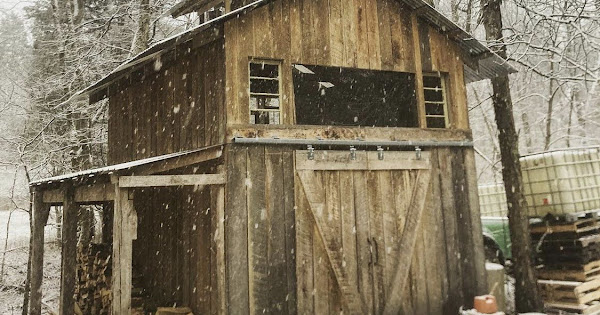 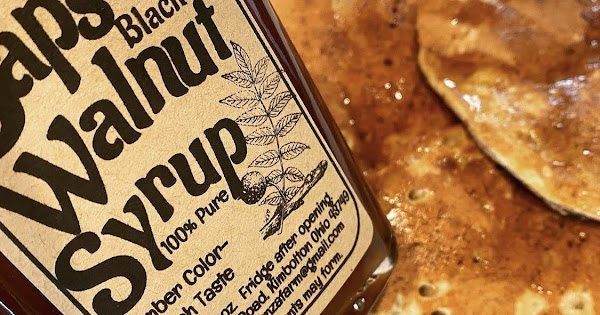 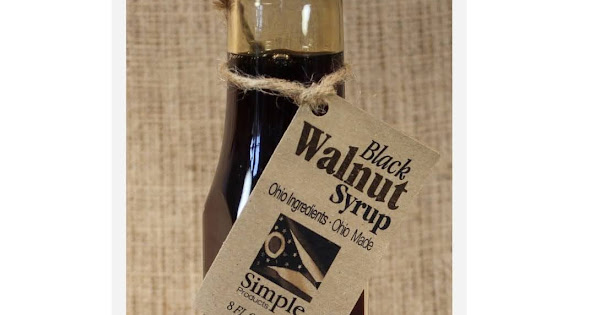 Ironwood, Butternut and Sycamore are among some of the other trees that can be tapped for sap and syrup.  Butternut is technically also a walnut tree, just not black walnut.  Including non black walnut species into the conversation, Aleki Gribin has 1,500 taps in Black, Manchurian and English walnut trees on Elbrus Mountain outside of Moscow, Russia. and makes the claim his 8 Walnuts brand in Russia is the world’s largest producer of walnut syrup. On a facebook forum for Black Walnut Syrup Producers, Aleki once claimed “We have started getting sap at the end of November 2019 and finished at the end of March.” 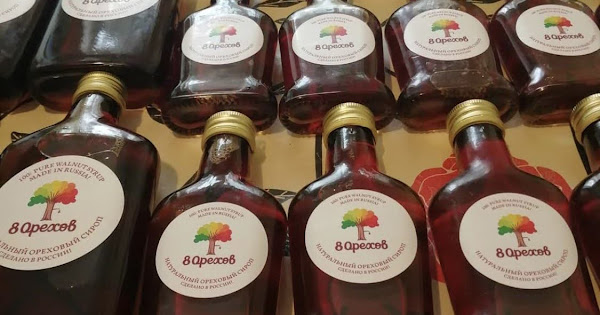 People also worry about poison and pectin.   Note, this is not medical advice, we are not doctors, but rather farmers.  First, black walnut trees are a nut tree, so anyone with a crazy nut allergy, we simply don’t make any promises with this product.  Black walnut sap is processed in our maple facility and if that is of concern to you, this is completely understand.  Additionally, Juglone is a poison contained in many parts of the black walnut tree.  A variety of issues arise from this chemical, but there are no reports to be found that anyone has experienced juglone poisoning from finished black walnut syrup.  Any horror stories reported with black walnut trees as the culprit are pertain to not properly handling the nuts themselves, not when dealing with sap.  Either the juglone is not present in the sap, or its broken down in the boiling process of sugar making and is not a concern when consuming this product. 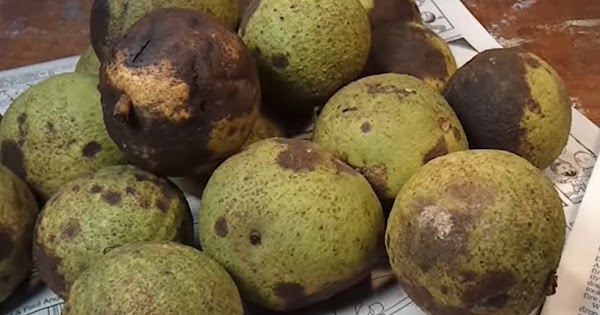 Pectin is also prevalent in black walnut sap, the substance used as a thickening agent in jam/jelly making and adds another layer of challenge in the sugar making process.  Some good advice when boiling down black walnut sap to syrup is to not wait until you are at finished syrup to start thinking about filtering.  In our process we typically draw off the main evaporator just before finished syrup, at about 55 brix (finished syrup is about 67 brix) and pass it through a pre-filter before finishing the batch on a finishing pan before giving another, final filtering of the finished syrup.  Some producers will give up on filters, I don’t blame them, but unfiltered syrup is not proper for sale in a legal sense.  For technical information regarding black walnut syrup production at scale, Cornell Small Farms published the following resource, as we highly recommend anyone interested give sugar making a try, it makes a great winter hobby!

Tapping Walnut Trees for a Novel and Delicious Syrup

The flavor of this syrup is something worth experiencing vs trying to describe.  All things considered above, we hope you can understand why this product is more expensive than maple syrup.  Pancake Hollow Sugarworks is proud to be part of the black walnut syrup producing community. Our product is of the highest quality and are guaranteed to be a flavor so unique you’ll never forget it.  Impress a friend or try something new with the purchase of a 200ml glass flask bottle of our 100% Pure New York Black Walnut Syrup.